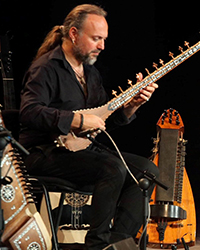 For more than a decade, Efrén López has been promoting this kind of musical encounter in Spain, Switzerland, Greece, Turkey, Cyprus, The Netherlands, France, Italy, Germany, and Portugal.

The goal of these workshops is the experimentation within the field of the so-called "Modal music", which makes limited use of harmony, and bases its structure on certain very specific and defined scales, rules, aesthetics, modulations and ornamentation.

With this premise, we analyze pieces belonging to several traditions that use those modal systems:
Greek, Turkish, Iranian, Arabic, Azeri, Indian, Afghan music... Both in their melodic/intervallic and rhythmic dimension.

Departing from the analysis of all this material we can create our own compositions, arrangements, and improvisations, using particular intervals, odd rhythm patterns and other elements relatively uncommon in the traditions of Western Europe.

The basic elements that we work on are the following:

We are no longer accepting registration for this event