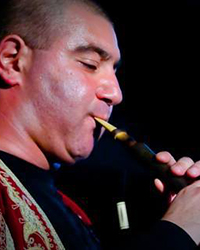 Tigran Aleksanyan was born in the historic Ararat Mountains of Armenia and settled in the UK in 2001. Music having been an important part of Tigran Aleksanyan's life from early childhood, his father enrolled him at music school at age nine.

He graduated from the Armenian Conservatory in 1992. Aged 17 he won a pan-national competition, was a member of the Armenian State Dance Ensemble's orchestra and joined Akhtamar Dance Group. He moved to London in 2001, becoming a massive asset to the UK, World, and Folk music scenes. He has mastered the duduk, zurna, clarinet, shvi, and pku. Tigran has been a member of Yasmin Levy and Daphna Sadeh’s bands, and La Banda Europa. He has recorded and performed with British zither-player Andrew Cronshaw in various countries, as well as in WOMAD with SANS quarter. He recently co-founded the National Duduk Ensemble of Armenia.

The duduk is generally considered the most important (and most characteristic) instrument in the Armenian folk traditions.