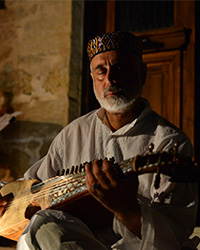 Daud Khan, was born in Kabul/Afghanistan in 1955. He studied Robab (a traditional lute-instrument of Afghanistan) with Ustad Muhammad Umar, who was the most famous Robab-interpret of the classical style as well as the traditional folklore style in his country. The knowledge about building as well as playing the Robab has become rare, and only a few artists still keep the tradition of the classical robab-style which was mainly represented by Ustad Muhammad Umar in Kabul. Daud Khan is trying to preserve this authentic style of his master’s school.

Since 2004 Daud Khan is performing with the Ensemble Radio Kabul in concerts and festivals all over Europe and abroad. He participated in the famous Agadir Festival in Marocco and he took part in concerts with the well-known instrumentalist Jordi Savall and his ensemble.

In Cologne Daud Khan is head of the Academy of Indian Music, founded by Ustad Amjad Ali Khan. There he follows his masters tradition of teaching the Robab as well as the Sarod. Daud Khan’s CD-recording Tribute to Afghanistan has been published and he participated in many CD-productions as instrumentalist.

The voice of the mystics (Jaffar Hussain Khan-Qawwali)
The soul of sound (Ustad Muhammad Umar-Robab)
A world of string and sound (B.L.Sopuri-Santoor)
Dorran – Ahmad Sadozai studies the Robab with his father M. Daud Khan and accompanies him regulary in concerts on the Robab . He also took lessons on the Sarod by Sarod Maestro Amjad Ali Khan.