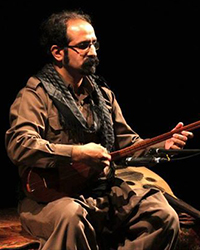 Kourosh Ghazvineh was born in 1982 in Sahneh of Kermanshah in Iran. At a very young age he started learning the Persian santur with Nouzar Rezai. In 1997 he studied the classical Persian Kurdish Makam for Tanbur focusing on the repertoires of Ostad Taheri, Yar Veisi, Seyid Khalil, Seyid Amrolah Shah Ebrahimi, Ali Akbar Moradi.

For four years he has been a resident composer at the Kermanshah radio. He has written a music book for Tanbur, which was published in both Kurdistan and Irak. In 2014 he travelled in France with the group Agu Nur.

Currently he is teaching music in Rasht. In 2017 participated in labyrinth music workshop for teaching and concert in Houdetsi and Rhodes. Concert in GENEVA 2017. Concert in BELGIUM 2017. Charity  some concerts in iran to help people affected by the earthquake in Kermanshah-iran.