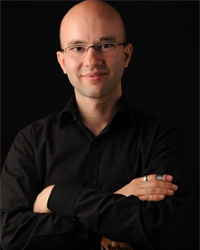 Muhittin Kemal, born in Karlsruhe, Germany, first came across music at the age of 5. Under the supervision of composer and lutenist Ismet Alpaslan he learned the basics of classical Turkish music both in song and theory. At the age of nine he gained his first experiences with an instrument on a violin participating in a choir founded by Ismet Alpaslan.

In 1992 he began to play the Kanun and was introduced by Eyüp Firat to the basics of the instrument. He subsequently studied with Göksel Baktagir with whom he was able to further and deepen his knowledge.

In 2007 he took part in workshops on Crete initially as a student of Göksel Baktagir and later as a teacher and as a guest lecturer. On Crete Muhittin Kemal worked together with Ross Daly, Kelly Thoma, Sokrates Sinopoulos, Efren Lopez and Zohar Fresco and others. During this period he expanded further his horizon in respect to playing technique and musicality.

In 2008 he established together with regional artists the Oriental Music Academy in Mannheim, Germany. As a lecturer for the first time he laid down the basic foundations for the musical education in playing the Kanun, Makam theory of Turkish music and vocals. Within this framework he collaborated together with masters such as Derya Türkan, Murat Aydemir and Yurdal Tokcan on a number of projects.

Between 2009 and 2012 he conducted the concert series “Melodies of old Istanbul”. Since the premiere of “Seyahatname” (the travelogues of Evliya Celebi) he formed the Academy Vocal Ensemble together with Bora Uymaz. As an expression of his musical expansion one could make reference to “LebiDerya”. An Oriental Jazz Ensemble which builds bridges between traditional Turkish music and Jazz. With LebiDerya he won the competition “Creole Süd-West” in 2011 and took part in the final in Berlin. In 2012 he was once again nominated with the group for the Jazz Prize of Berlin.

In 2011 their first album with the name “Orientation” was released. In the opera “Head-On” after the film with the same name by Fatih Akin, he performed on the kanun under the direction of Bernhardt Epstein in the first German-Turkish opera at the State Opera Stuttgart. In Tango Ala Turka his passion for Latin American rhythms melts together with Turkish lyrics and music. In collaboration with famous composers such as Cengiz Onural Muhittin Kemal has been able to span musical bridges between different cultures. After numerous concerts the ensemble recorded its first pieces in Istanbul for its album planned for release in 2015. Since 2013 this ensemble has been working together with the Electoral Palatinate Chamber Orchestra and has developed a joint tango program with the arrangements being written by Cengiz Onural and new pieces have also been created for this project. The premiere of this project took place within the program of “Enjoy Jazz” in Mannheim.

In 2012 his debut album “Emotions” was released with the release concert with all collaborators involved taking place in Mannheim. His first album is a prime example for transnational intercultural cooperation. The recordings took place on Crete with Kelly Thoma and Ross Daly, in Istanbul with Murat Aydemir and Cengiz Onural and in Mannheim with Serap Giritli, Yurdal Tokcan and Mehmet Yalgin.

In order to deepen his profound knowledge of classical Turkish music with European harmony and musical theory he has been studying musicology at the Goethe University Frankfurt since 2012 and is working on his book “Introduction to Turkish Makam Theory”.

In 2013 he concluded the project “The Abduction from the Seraglio Ala Turka”. For the first time the musical development before, during and after Mozart is illustrated that formed the musical and cultural dialogue between cultures. Since 2014 he has been part of the project “Lamekan” playing the Kanun. In April of the same year the first album of this ensemble was recorded in Istanbul. In October 2014 the CD Release of the ensemble took place in the world famous Art Centre in Brussels known as the “Bozar”.

In March 2014 he collaborated with the “WDR Symphony Orchestra” with the project Kelebek where, alongside traditional Turkish pieces, “Young Person´s Guide” from Benjamin Britten was also performed. Here together with the instruments of the symphony orchestra Turkish instruments were also introduced. This project was produced as a documentary film and made available to schools across Germany for music lessons. It was subsequently awarded the German Radio Prize in 2014.

In 2015 the premiere of the project “Anatolia Classic” took place. As is often the case with traditional music, famous legends were incorporated into musical works which also found their place in classical Turkish music. In this project, classical music and traditional music were integrated. Since the summer of 2015 Muhittin Kemal has been teaching at the first world music institute for world music in the Pop Academy Mannheim. As a member of this institute, he fulfilled his lifelong dream of fostering the conditions to enable students to study Oriental music in Europe and Germany.

As a companion of his institute and dreamer of being able to study Oriental music in Europe and Germany, he translates the book “MAKAM GUIDE” by Murat Aydemir into German, which he is going to publish during the year 2018.