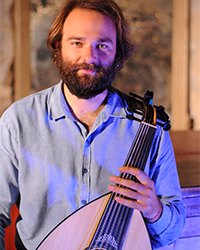 Instagram: goulista3
Fb: Taxiarchis Georgoulis
Email: This email address is being protected from spambots. You need JavaScript enabled to view it.

Taxiarchis Georgoulis was born in Kalamata (1993). The first contact with music began at the age of eight, with the bouzouki. Some years later he started to play the Greek mainland lute under the guidance of Eliah Kappakos and later of Christos Zotos, while he was participating in festivals and concerts throughout Greece.

He attended Byzantine music lessons with John Plemmenos, as well as classical harmony and counterpoint. In 2009 he entered the paths of oud with Nikos Palaiologos. Later he participated in numerous seminars of Labyrinth Musical Workshop with Yurdal Tokcan, Erkan Ogur, Omer Erdogdular, Eugene Voulgaris, Papapetropoulos Pericles, Socrates Sinopoulos, Harris Lambrakis, Joseph Tawardos and Ross Daly. He lived for two years οn Crete where he worked with Ross Daly, with whom he continues to work as a member of the quartet along with Kelly Thomas and Sofia Efklidou.

He is a member of Giorgos Psaltis' “Akousmata Anatolis”, where they have been playing regularly for the last few years. He has won the second prize at Tunisia's International Oud Festival.  Since 2018 he has been teaching Turkish oud at Labyrinth Musical Workshop.