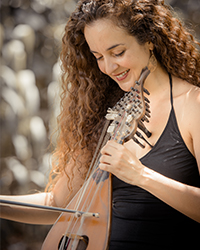 Fb: kelly thoma
Email: This email address is being protected from spambots. You need JavaScript enabled to view it.
Official Website: www.kellythoma.com

Kelly Thoma was born in Piraeus (1978). Since 1995, she has been studying the Lyra with Ross Daly and three years later started traveling with him and his group, “Labyrinth”. She has taken part in many projects with musicians from various different traditions from other countries.

She has released three albums of her own compositions Anamkhara (2009), 7Fish (2014) and "As Τhe Winds Die Down" (2018). She has graduated from the English Literature department of the Athens University as well as from the ”Rallou Manou” Dance School.