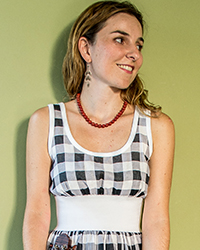 Martha Mavroidi is a singer, lutist, and composer from Greece. She has been singing and playing folk lutes from her childhood, performing music from Greece and the Balkans. Later she developed an interest in contemporary music, blending elements of folk music with contemporary harmony and improvisation.

She graduated from the Music High School of Pallini, and she has studied Musicology in Athens, Ethnomusicology in London and Los Angeles, and Contemporary Music in Amsterdam. She has studied the saz with Periklis Papapetropoulos, Bulgarian singing with Dessislava Stefanova, Galina Durmushlyiska, and Tzvetanka Varimezova, and vocal technique with Giogos Samartzis.
She has collaborated with musicians and ensembles such as the legendary Greek folk violinist Stathis Koukoularis, ECM artist Savina Yannatou, English folk singer and violinist Eliza Carthy, composer Giorgos Koumendakis and the Greek National Opera. She formed her own Quartet with which she has performed in various venues in Europe and the USA.

She is a member of the vocal quartet "Yasemi", and the Balkan music ensembles "Turshi Sextet" and Hopla Loon". She conducts the “Happy Hour Choir”, a workshop in the form of a vocal orchestra, and the Greek Folk Choir "Rodia". She has composed music for prize-winning short and feature films, and for dance and theater productions. Since 2013 Martha is the artistic director of the "Tinos World Music Festival". She has released five albums: The Garden of Rila (2009), Portaki (2012), Agiorgitiko (2014), Thread and Needle (2017), Magiatiko (2019).