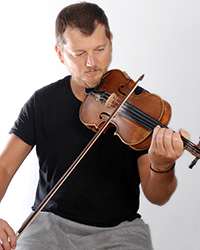 Fb: giorgos papaioannou
Email: This email address is being protected from spambots. You need JavaScript enabled to view it.

Giorgos Papaioannou was born in Athens in 1982. He studied music from an early age at Atticus Odeum. Since the age of 15, he has been playing with numerous groups of classical, rock, Greek folk & art music.

His involvement with traditional music commenced during his studies at the University of Crete, Department of Sound Engineering.

He has followed seminars in Turkish and Arabic violin techniques as well as in Bulgarian music. He won a scholarship to attend a seminar on Indian music with Dr. L. Sumbramaniam from the Royaumont Foundation in France. He was a member of the Symphony Orchestra of the Heraklion Municipality. From2012 he teaches modal music and improvisation at Labyrinth Musical Workshop (with Artistic Director, Ross Daly), as well as in many other places of the world.

He has participated in numerous music festivals in Denmark, France, Bulgaria and Turkey and all over Europe and he has collaborated with numerous artists, such as Ross Daly, Hainides, Kostis Avyssinos, Nikos Papaioannou and many others. He has participated in recordings with the Neda band which he was a member a.o. Anamesis https://store.cdbaby.com/Artist/GiorgosPapaioannou is his first personal work.

In 2018 he collaborated with the film director Emin Alper writing music together with Nikos Papaioannou for the film “A tale of the three sisters” (Kiz kardesler) which won a lot of awards, among them for the best music in Instabul film festival.