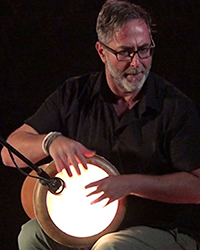 Fb: vagelis karipis
Email: This email address is being protected from spambots. You need JavaScript enabled to view it.

Vagelis Karipis was born in Athens (1971). He studied Byzantine music and music theory in the Greek Music School from where he graduated in 1992. In the same period, he started playing frame drums, first as self –taught and then as a student of Tricy Shankaral, Joe Santos, Jammey Haddad, Arto Tuncboyaciayan.

It is important to mention his presence in discography the last 18 years, with about 400 productions in recordings and theatrical plays. In January 2004 he represented Greece in the international meeting (program MediMuses) for frame drums in Tunisia. With the MediMuses he gave seminars in Greece, Cyprus, Lebanon, Jordan, Israel, Tunisia, Holland, New Zealand, England, and USA. In April of the same year, he was invited by the Greek composer Yiannis Psathas to participate in concerts with the Nederlands Blazers Ensemble in Holland and Germany, and with the Stroma music group in New Zealand.

In 1998 he created the group Krotala with Petros Kourtis and Andreas Papas and with this they traveled in the 5th Drums festival of Berlkey College of Music (1999), the Rythmstick festival (London 2003), the Forum (Barcelona 2004), the EXPO (Japan 2005) and they participated in a recording with Loreena Muckennit. Till now he released the albums Krousta (1995 FM Records) in cooperation with Yiorgos Yevgelis and Andreas Papas, Krotala (2002 ETERRA MUSIC), Voices of drums (2005 Metro Magazine) and Percussion Pictures (2011 ANTART PRODUCTIONS). He participated in recordings for the Olympic Games of Athens.

Since 2009 he gives concerts with Haig Yazdjan (oud) and Yiotis Kiourtzoglu (bass) in Greece and Europe as a TRIO. He is as well part of Ara Dinkjan Quartet with Socrates Sinopoulos (kemenche) and Yannis Kyrimkyridis (piano). He has worked as a teacher in music Schools in Greece, at present -since October 2016- he teaches traditional percussion at the Master's degree in the Musicology department of the University of Athens.